Executive editor Janice M. Allan is a senior lecturer in English studies in the School of English, Sociology, Politics & Contemporary History at the University of Salford in England.
Series Editor Elizabeth Foxwell, an Agatha Award winner, is managing editor of Clues: A Journal of Detection.
Margaret Kinsman, consulting editor of Clues and 2016 Raven Award recipient, is a visiting research fellow in popular culture at London South Bank University, United Kingdom. She has published numerous articles related to crime fiction and has presented papers and chaired panels at international conferences.

Blurring the Genre Borderlines: Tana French’s Haunted Detectives
John Teel 13
In each of her mysteries, Tana French presents a different ­detective-narrator, and all of them are “haunted” by traumatic events from their childhoods or teen years. Through this use of “haunting,” French blurs genre “borderlines” by mixing the elements of the police procedural with, essentially, an aura of the gothic.

Unhappily Ever After: ­Fairy-Tale Motifs in Tana French’s In the Woods
Sarah D. Fogle 22
In her ﬁrst novel, In the Woods, Tana French makes sustained use of various ­fairy-tale motifs and conventions to illuminate her characters and their relationships as the murder investigation unfolds.

Tana French: Archaeologist of Crime
Rachel Schaffer 31
The parallels between archaeology and detection provide a framework for the way the protagonists in Tana French’s novels work. Both disciplines follow the same general stages of surveying the scene, excavating information, and analyzing and interpreting results to shed light on the effects of past events on the lives of contemporary people.

Liminality in the Novels of Tana French
Mimosa Summers Stephenson 51
In Tana French’s mysteries, the murder victims die at crucial turning points in their lives, and the detectives ﬁnd themselves on the edge, neither in nor out, of the cases they investigate. The protagonists become involved personally and pass through liminal zones that leave them altered when the novels end.

Twenty-First-Century Irish Mothers in Tana French’s Crime Fiction
rosemary erickson johnsen 61
Tana French’s three novels narrated by male detectives, In the Woods, Faithful Place, and Broken Harbour, reveal an intersection between crime ﬁction and the Irish literary tradition. Tropes of feminine imagery—particularly of the maternal—are implicated in the personal and professional failures of the narrators, and are part of French’s exploration of contemporary Ireland.

Murder in the Ghost Estate: Crimes of the Celtic Tiger in Tana French’s Broken Harbor
Shirley Peterson 71
In Tana French’s fourth novel, Broken Harbor, the crimes of Celtic Tiger excess are interrogated in a deracinated ghost estate, where the desire for prosperity results in dire consequences for a young family, belying the notion that Ireland’s troubled past was well removed from its upwardly mobile present.

“Built on Nothing but Bullshit and Good PR”: Crime, Class Mobility, and the Irish Economy in the Novels of Tana French
Moira E. Casey 92
Tana French’s novels demand serious literary attention for their social realist depiction of the cultural and economic impact of the Celtic Tiger economy and its recent crash. All four novels criticize Celtic Tiger culture, present the pre–Celtic Tiger past ambivalently, and represent the challenges of economic class mobility in contemporary Ireland.

Author Guidelines are on page 115 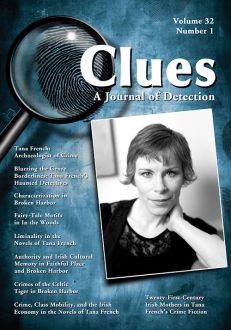