Executive editor Janice M. Allan is a senior lecturer in English studies in the School of English, Sociology, Politics & Contemporary History at the University of Salford in England.
Series Editor Elizabeth Foxwell, an Agatha Award winner, is managing editor of Clues: A Journal of Detection.
Margaret Kinsman, consulting editor of Clues and 2016 Raven Award recipient, is a visiting research fellow in popular culture at London South Bank University, United Kingdom. She has published numerous articles related to crime fiction and has presented papers and chaired panels at international conferences.

An Introductory Word
JANICE M. ALLAN      5
The new executive editor of Clues introduces herself and new members of the Clues editorial board as well as discusses the content of the issue.

James Hogg’s Confessions of a Justified Sinner and the Romantic Roots of Crime Fiction
MATTHEW MCGUIRE      8
The author attempts to situate James Hogg’s The Private Memoirs and Confessions of a Justified Sinner (1824) as a key text in the proto-history of crime fiction. Hogg’s novel is considered alongside the early crime fiction of William Godwin and Charles Brockden Brown, and the cultural milieu of the 1820s, specifically Blackwood’s “tales of terror” and the work of Thomas De Quincey. Reading Hogg’s novel in this way reasserts the somewhat overlooked origins of crime fiction within the broader contexts of romanticism.

“Away with dark shadders!” Juvenile Detection Versus Juvenile Crime in The Boy Detective; or, The Crimes of London. A Romance of Modern Times
LUCY ANDREW      18
The 1860s saw a proliferation of “penny dreadful” fiction, featuring juvenile criminal protagonists, which was accused of glorifying and encouraging crime amongst its young readers. Working from within this controversial tradition, The Boy Detective (1865–66) utilizes the juvenile detective hero to reconfigure the relationship, both fictional and real, between the child and crime.

“I Used to Be a Highbrow but Look at Me Now”: Phrenology, Detection, and Cultural Hierarchy in S. S. Van Dine
BROOKS E. HEFNER      30
This article reads Willard Huntington Wright’s work against his anxieties about cultural hierarchy and value, utilizing archival work in Wright’s papers at the University of Virginia and unearthing a previously unknown series of crime stories that he published under another pseudonym a decade before his success as bestselling detective novelist S. S. Van Dine. The author argues that Wright’s work in popular fiction provides a special opportunity for interrogating the highbrow/lowbrow divide and its phrenological roots.

(Re)Model(ed) Towns and the Remodeling of American Ideology: The Expansion of Middle-Class Hegemony in Allan Pinkerton’s The Model Town and the Detectives and Dashiell Hammett’s Red Harvest
MARK T. DECKER      42
Critics have seen Dashiell Hammett’s Continental Op as a radical critique of capitalism and a symbol of American individualism. An exploration of Hammett’s middle-class aspirations and a comparison between Red Harvest (1929) and Allan Pinkerton’s The Model Town and the Detectives (1876) suggests that Hammett participated in the ideological reconfiguring of the American middle classes that took place in the late-nineteenth and early-twentieth centuries. Both texts portray towns redeemed by a middle-class, professional detective, but Hammett’s detective is an amoral, trained expert—the twentieth-century ideal—and no longer Pinkerton’s respectable entrepreneur.

Unruly Bodies: The Politics of Sex in Maj Sjöwall and Per Wahlöö’s Martin Beck Series
DAWN KEETLEY      54
Between 1965 and 1975, Swedish writers Maj Sjöwall and Per Wahlöö published ten police procedurals that defined the shape of Scandinavian crime fiction. Although the later novels featuring Inspector Martin Beck and his investigative team clearly indict the social-democratic welfare state in Sweden, the earlier novels depict crimes that critics have dubbed “private,” “personal,” “pathological,” and “almost totally apolitical.” The author questions the consensus that the earlier novels, because they involve sexual crimes, are not political.

Going South: The Hap and Leonard Novels of Joe R. Lansdale
MICHAEL GIVEN      65
The author argues that the Hap Collins and Leonard Pine novels by Joe R. Lansdale exemplify a special category of crime fiction that might be described as “hard-boiled Southern noir.” Through a comparison of passages from Lansdale’s Savage Season (1990) and Mucho Mojo (1994) to James Lee Burke’s Dixie City Jam (1994), the author explores the generic hybridity of this understudied writer.

“I’m Your Girl”: Queering Gender Affiliation in Megan Abbott’s Queenpin
PHYLLIS M. BETZ      76
Characters’ desires in noir fiction affect the development of their relationships and the narrative, usually within an appropriate heterosexual situation. However, in Megan Abbott’s Queenpin (2007), the unnamed female narrator directs her emotional and erotic attraction to Gloria Denton, the queenpin of the title. Throughout the novel, the narrator alters between explicitly acknowledging and articulating this attraction and refusing to accept its implications; instead, she directs her sexual desire to an acceptable male despite the violence of this relationship. The narrator’s ultimate inability to accept her desire for Gloria leads to her diminished position at the novel’s conclusion.

Fictional Death and Scientific Truth: The Truth-Value of Science in Contemporary Forensic Crime Fiction
KERSTIN BERGMAN      88
In this article, the author explores the relationship between science and truth in forensic crime fiction by analysis of narrative and media-specific constituents of CSI: Crime Scene Investigation (2000–) and Patricia Cornwell’s The Scarpetta Factor (2009). Despite the different media, both are found to establish a strong bond between science and truth, and readers/viewers are encouraged to assume that this also is the case in the external world.

Dead Husbands and Deviant Women: Investigating the Detective Widow in Neo-Victorian Crime Fiction
NADINE MULLER      99
Over the past decade, the detective widow has become a well-established character in the little-explored subgenre of neo–Victorian crime fiction. In Tasha Alexander’s Lady Emily series, the author argues, the detective widow investigates the gendered characteristics and complexities of Victorian widowhood while detecting the artistic crimes associated with historical fiction’s imitations and adaptations of the past. 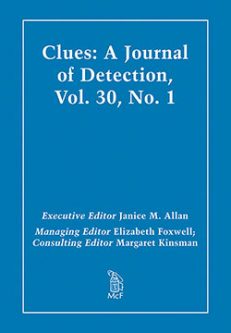