Elizabeth Foxwell, an Agatha Award winner, is managing editor of Clues: A Journal of Detection.

Male Gothic Detection and the Pre-Raphaelite Woman in Lady Audley’s Secret
Emily E. Auger      3
The author considers Mary Elizabeth Braddon’s Lady Audley’s Secret (1862) as a detective novel marked by both literary and artistic gothic characteristics, including the classic “locked room” and “locked trunk” motifs, as well as Lady Audley’s pre–Raphaelite portrait. This portrait is revealed as both clue and a-priori “truth” in the detective’s investigation of Lady Audley’s fraudulent upward class mobility.

“Petticoated police”: Propriety and the Lady Detective in Victorian Fiction
Arlene Young      15
Through an examination of nineteenth-century stories and articles featuring female detectives, this essay examines the figure of the Victorian female sleuth, focusing on the class and gender politics governing the entrance of women, real or fictional, into this area of work. The author’s analysis includes interpretations of the cultural content of both text and images from the stories.

Discipline and Detection: The Domestic Power of Women in Anne Perry’s Highgate Rise
Lewis C. Roberts      29
Anne Perry’s Victorian detective novels link women’s domestic power, criminal investigations, and social reform. Although she argues that women exercised social control through their domestic gaze, Perry finally can offer only the companionable marriage of Thomas and Charlotte Pitt as an answer to the violence of both the Victorian period and our own.

Marginal Man and Hard-Boiled Detective: Racial Passing in Robert Skinner’s Wesley Farrell Series
Sinéad Moynihan      56
The author argues that tropes of detection and racial passing are mutually compatible in Robert Skinner’s six New Orleans–set mysteries. Set in the 1930s, they feature Wesley Farrell, a businessman-turned-sleuth who is passing as white. A passing plot coupled with a murder mystery foreground the issues of detection, evidence and clues, guilt, confession, exposure, and the often gross disparity between law and justice. 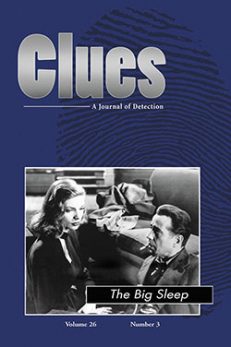