The Role of Wardrobe in Early Motion Pictures

“Clothes make the man” (or woman). This is especially true in early Hollywood silent films where a character’s appearance could show an immense number of different things about them. For example, Theda Bara’s role in A Fool There Was (1915) was known for her revealing clothing, seductive appearance, and being the first “Vamp.”

Wardrobe and costume design played a larger role in silent films than in modern movies. The character’s clothes told the audience who they were and what their role was in the movie. In this in-depth analysis, the author provides examples and explanations about noteworthy characters who used their appearance to further their fame.

Lora Ann Sigler is a professor emerita of art history at California State University. She is a portrait/landscape artist and designer living in San Pedro, California.

• “A fascinating, in-depth analysis of the wardrobes designed and created for early motion pictures and their stars, and the influences of those wardrobes. …highly recommended”—Choice

• “Vibrant, evocative writing style…a comprehensive and much-needed addition to this genre…a useful resource for students or enthusiasts of film studies…Sigler’s witty commentary entertains from the outset, striking an ambitious balance between style and substance.”—The Journal of Dress History 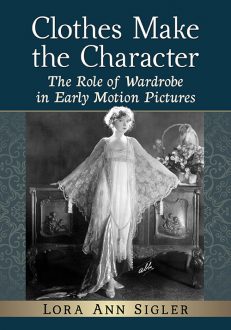 You're viewing: Clothes Make the Character $55.00
Add to cart