On November 11, 1862, Brigadier General Thomas Lanier Clingman, despite a lack of formal military training, was named commander of four regiments sent to the eastern counties of North Carolina to prevent Federal troops from making further inroads into the state. Clingman has been called one of North Carolina’s most colorful and controversial statesmen. Like Clingman, the brigade, composed of the 8th, 31st, 51st, and 61st regiments of North Carolina Infantry, has been both praised and condemned for its performance in battle. This work determines the effect Clingman’s Brigade had on various battles and in various defensive positions. It also corrects falsehoods by providing a more accurate portrayal of Clingman, the brigade, and the problems it faced.

The late Frances H. Casstevens wrote frequently about the American Civil War and North Carolina history. She was retired from Wake Forest University and lived in Yadkinville, North Carolina.

Appendix C. The Men Who Made Up Clingman’s Brigade—Officers     230

Winner, Willie Parker Peace Award—North Carolina Society of Historians.
“by using a variety of extensively researched materials compiled and presented in a fascinating way, Casstevens has done much to unravel some of the mystery of the man while telling the story of the Rebels he commanded”—Our State; “nicely done…the book should be of interest to anyone interested in Clingman and his troops or North Carolina and the war”—The Civil War Courier; “one of North Carolina’s more enigmatic but ignored commanders…dispels myths and provides a more thorough account of the leader and his unit than ever before”—Civil War Book Review; “an interesting discussion…informative”—Colorado Libraries; “excellent…comprehensive”—Watauga Democrat. 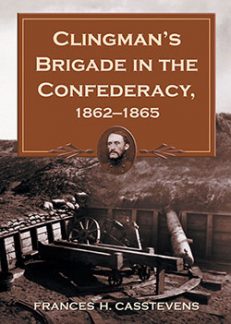