The third in a series about home video games, this detailed reference work features descriptions and reviews of every official U.S.–released game for the Neo Geo, Sega Genesis and TurboGrafx-16, which, in 1989, ushered in the 16-bit era of gaming. Organized alphabetically by console brand, each chapter includes a description of the game system followed by substantive entries for every game released for that console. Video game entries include historical information, gameplay details, the author’s critique, and, when appropriate, comparisons to similar games. Appendices list and offer brief descriptions of all the games for the Atari Lynx and Nintendo Game Boy, and catalogue and describe the add-ons to the consoles covered herein—Neo Geo CD, Sega CD, Sega 32X and TurboGrafx-CD.

Fulltime freelancer and pop culture expert Brett Weiss lives in Fort Worth, Texas. In addition to his reference books about classic home video games, he has written for numerous magazines and newspapers.

• “Brett is a talented writer whose passion for various artistic endeavors, such as video games and music, comes through in his own work. The Classic Home Video Games series is one worth reading. Whether you grew up with these games or you’re simply looking for an entertaining history lesson, there’s a lot here to enjoy. Pick up these books and game on!”—Michael Cavacini, award-winning communications professional, writer, and professor 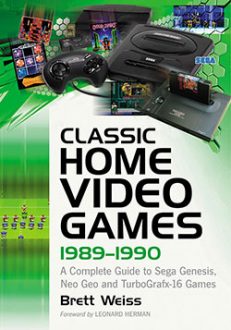