Circle in the Square Theatre

Based on years of research as well as interviews conducted with Circle in the Square’s major contributing artists, this book records the entire history of this distinguished theatre from its nightclub origins to its current status as a Tony Award-winning Broadway institution. Over the course of seven decades, Circle in the Square theatre profoundly changed ideas of what American theatre could be. Founded by Theodore Mann and José Quintero in an abandoned Off–Broadway nightclub just after WWII, it was a catalyst for the Off–Broadway movement. The building had a unique arena-shaped performance space that became Circle in the Square theatre, New York’s first Off–Broadway arena stage and currently Broadway’s only arena stage. The theatre was precedent-setting in many other regards, including operating as a non-profit, contracting with trade unions, establishing a school, and serving as a home for blacklisted artists. It sparked a resurgence of interest in playwright Eugene O’Neill’s canon, and was famous for landmark revivals and American premieres of his plays. The theatre also fostered the careers of such luminaries as Geraldine Page, Colleen Dewhurst, George C. Scott, Jason Robards, James Earl Jones, Cecily Tyson, Dustin Hoffman, Irene Papas, Alan Arkin, Philip Bosco, Al Pacino, Amy Irving, Pamela Payton-Wright, Vanessa Redgrave, Julie Christie, John Malkovich, Lynn Redgrave, and Annette Bening.

Sheila Hickey Garvey is a professor emerita of theater at Southern Connecticut State University in New Haven, Connecticut. She is a professional director, actress and a past president of the Eugene O’Neill Society.

Circle in the Square Productions 355

“This outstanding book chronicles one of the most remarkable theater organizations created since WW II…a detailed, well-written narrative… Rich with backstage stories and intimate portraits and commentary from the artists…Garvey provides an intimate view that readers will find exhilarating, and her scholarship is superb…. highly recommended”—Choice; “A must read”—NewsNotes Dance Blog 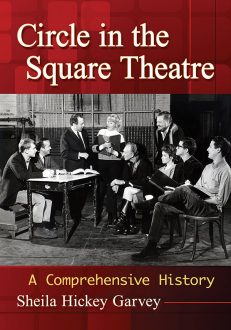 You're viewing: Circle in the Square Theatre $59.95
Add to cart