Chronology of Immigration in the United States

The United States is truly a nation of immigrants. While it was very sparsely populated by mostly Native Americans in 1600, today it is a nation of about 300 million people, most of whom are immigrants or descendents of immigrants. Before the landmark Immigration and Nationality Act of 1965 (which abolished national-origin quotas), about 40 million immigrants had come to America, most of them from Europe. Since 1965, another 40 million immigrants have arrived, primarily from Mexico and Asia.
This book details the issues and events of immigration to America chronologically from 1600 to the present, beginning with the mass influx of Jamestown settlers, Pilgrim separatists, and slaves during the colonial period and concluding with a discussion of the ongoing contemporary legislative debates over illegal immigration and border security. Other topics include the development of the first immigration-regulating laws in the Alien and Sedition Acts of the late 1790s; the mass influx of cheap immigrant labor during the industrial revolution; the intended severity of the 1917, 1921, and 1924 immigration laws; and the effects of the September 11, 2001 attacks, the Patriot Act of 2001, and the Homeland Security Act of 2002 on reshaping the public’s opinion toward national security and immigration, particularly illegal immigration.

Statistical analyst Russell O. Wright is the author of a series of Chronology reference works on subjects including American housing, education, immigration, public health, transportation, and the stock market. He is also the author of several McFarland baseball books and lives in Rancho Palos Verdes, California. 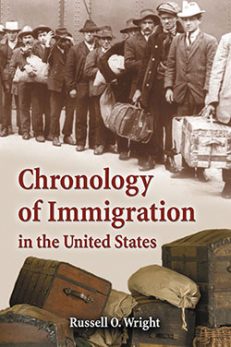 You're viewing: Chronology of Immigration in the United States $35.00
Add to cart