Saxophonist Charlie Barnet (1913–1991) scrabbled for jobs both as a sideman and as a leader. His concern was not so much attracting a broad public or making a lot of money, but instead to form bands with a strong musical content that were somewhere between the out-and-out jazz bands and the commercially successful bands of his day. His musicians and arrangements were his own choices and he was able to put together a good mix of lead men and soloists, rhythm section players, and talented arrangers along with his own voice and saxophone playing. Charlie’s solos were good for their time and caught the ears of popular music reviewers. Many photographs and illustrations (including some rare) accompany this full account of his life and career.
The discography provides such information as the names of the songs, arrangers, musicians, and vocalists, record company and number, and brief commentary. Song title, name and program indexes and an album listing accompany the text.

The late Dan Mather was a librarian and avid record collector. He lived in Bellingham, Washington.

Winner, ARSC Award for Excellence
“really delivers the goods…unique…pertinent and crazy accounts of Barnet and his band. Great photos and use of clippings…never dull”—Classic Images; “a full account of the life and career of Barnet with an up-to-date discography…recommended”—ARBA. 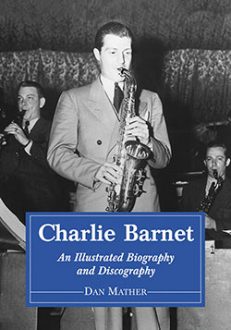