Charles Spencer Chaplin was a stage performer before he was a filmmaker, and it was in English music hall that he learned the rudiments of his art. The last film he made in the United States, Limelight, was a tribute to the music hall days of his youth. As a parallel to Chaplin’s past, the film was set in 1914, the year he left the stage for a Hollywood career.
This collection of essays examines Limelight and the history of English music hall. Featuring contributions from the world’s top Chaplin and music hall historians, as well as previously unpublished interviews with collaborators who worked on Limelight, the book offers new insight into one of Chaplin’s most important pictures and the British form of entertainment that inspired it. Essays consider how and why Chaplin made Limelight, other artists who came out of English music hall, and the film’s international appeal, among other topics. The book is filled with rare photographs, many published for the first time, sourced from the Chaplin archives and the private collections of other performers and co-stars.

Frank Scheide is associate professor of film history and criticism at the University of Arkansas. He lives in Fayetteville, Arkansas.
Hooman Mehran lives in New York City.
Dan Kamin trained Robert Downey, Jr., for his Oscar-nominated performance in Chaplin. He lives in Pittsburgh, Pennsylvania.

Part I. The Making of Limelight
Limelight—An Annotated Commentary      5

Not Quite According to Plan: Chaplin, Keaton and the Production of Limelight      16

The Ghostly Absence of “The Armless Wonder”: Afterthoughts on a Last-Minute Cut      56

The Identity of Nineteenth and Early Twentieth Century Music Hall, Limelight and the Tragedy of the Rejected Performer      111


Part IV. Featured Articles and Reviews
Who’s Who in the Chaplin Keystones      169 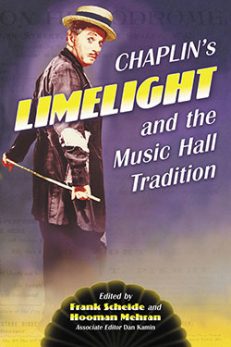 You're viewing: Chaplin’s “Limelight” and the Music Hall Tradition $49.95
Add to cart