A Study of Traditional Belief, with Newly Translated Prayers, Poems and Songs

This book provides a comprehensive overview of Celtic mythology and religion, encompassing numerous aspects of ritual and belief. Topics include the presence of the Celtic Otherworld and its inhabitants, cosmology and sacred cycles, wisdom texts, mythological symbolism, folklore and legends, and an appreciation of the natural world. Evidence is drawn from the archaeology of sacred sites, ethnographic accounts of the ancient Celts and their beliefs, medieval manuscripts, poetic and visionary literature, and early modern accounts of folk healers and seers. New translations of poems, prayers, inscriptions and songs from the early period (Gaulish, Old Irish and Middle Welsh) as well as the folklore tradition (Modern Irish, Scottish Gaelic, Welsh, Cornish, Breton and Manx) complement the text. Information of this kind has never before been collected as a compendium of the indigenous wisdom of the Celtic-speaking peoples, whose traditions have endured in various forms for almost three thousand years.

Sharon Paice MacLeod is a Harvard-trained Celticist, grant-funded researcher, historical consultant and professional musician. She has taught Celtic literature, mythology and folklore at the university level, and her areas of expertise include Celtic religion and belief, early Irish and Welsh poetry and wisdom texts, cosmology, and visionary traditions.

Introduction: Journeying to the Well of Wisdom  5

Part One: Celtic Religion and Mythology

1. The Sacred Elements of the Tradition  9

Appendix A: The Rights of Women in Early Celtic Culture  185

Appendix B: The Celtic Folksong Tradition  194

• “This well-organized, readable book unites a widely scattered body of primary information on the myths, ritual practices, songs, cosmology, poetry, folklore, and symbolism created within and shared among the Celtic cultures of western Europe…a good general volume on Celtic myth and religion. Recommended”—Choice 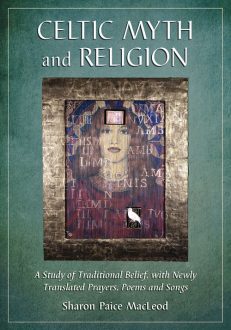 You're viewing: Celtic Myth and Religion $25.00
Add to cart