Celtic Cosmology and the Otherworld

Despite censorship and revision by Christian redactors, the early medieval manuscripts of Ireland and Britain contain tantalizing clues to the cosmology, religion and mythology of native Celtic cultures. Focusing on the latest research and translations, the author provides fresh insight into the indigenous beliefs and practices of the Iron Age inhabitants of the British Isles. Chapters cover a broad range of topics, including creation and cosmogony, the deities of the Gaels, feminine power in early Irish sources, and priestesses and magical rites.

Sharon Paice MacLeod is a Harvard-trained Celticist, grant-funded researcher, historical consultant and professional musician. She has taught Celtic literature, mythology and folklore at the university level, and her areas of expertise include Celtic religion and belief, early Irish and Welsh poetry and wisdom texts, cosmology, and visionary traditions.

A Note About ­Indo-European Root Words 8

1. Cosmology and the Celtic Dreamtime 9

2. Creation, Cosmogony and the Ancestry of the Gods 56

3. Sacred Cycles and the Mythic Symbolism of Time 76

4. Divining the Divinities: The Mórrígan, Danu and Anu 93

5. Restoring the Rightful Goddess: Sovereignty in the Tales of Findabair and
Gwenhwyfar 117

6. Mistress of the Wild Things: Abundance and Feminine Power in Early Irish Sources
130

7. The Circle of Nine: Priestesses, Islands and Magical Rites 161

9. Cauldron of Awen, Stream of Imbas: The Symbolism of Water and Divine Inspiration
216

• “Engaging…. From the first page of the Introduction, we feel as though she is telling us a beautiful story, going back-and-forth in time with ease and an effortless rhythm. The use of vital sources provides valuable background to the author’s line of thoughts, and allow readers to push their inquiries further. This process, as well as the general time of the book, creates a bond of trust between the reader and the author which winds up incredibly refreshing. To be able to research, gather, translate, analyze, understand and then render in a seemingly effortless way such knowledge is a true gift…a must read…a valuable asset”—Reading Religion

• “Macleod possesses masterly knowledge of the literary sources, familiarity with secondary literature in religious studies and anthropology and impressive linguistic skills.”—Studies in Medieval and Renaissance Teaching 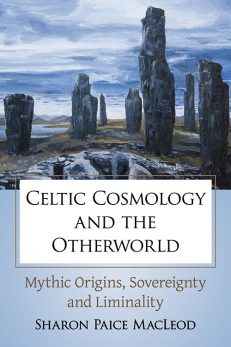 You're viewing: Celtic Cosmology and the Otherworld $29.95
Add to cart