A Tragic Life in Hollywood

Before she was a glamorous actress, before she was a war-time pin-up star, even before she was Carole Landis, she was Frances Lillian Ridste, an insecure young girl from Wisconsin. She was strikingly beautiful, talented, and on her way to becoming a movie star, yet she spent her entire life searching for love.
Though she appeared in more than 60 films during her short career, Landis was better known for her extraordinary beauty and many romantic relationships than for her acting or comedic timing. Like many starlets of the time, Landis worked her way up from uncredited bit parts (and according to rumors, from the casting couch) to leading roles in such films as Topper Returns (1940) and My Gal Sal (1942) over the course of her 11-year career. She spent more time visiting troops during World War II—traveling hundreds of thousands of miles and coming near death twice—than any other Hollywood star. Despite her seemingly glamorous and carefree life, Landis was unable to build a lasting relationship, a fact that contributed to her suicide at 29. This work examines Landis’s life and career in Hollywood, focusing on how her movie career affected her short, unhappy life.

The late E.J. Fleming researched Hollywood for decades and penned biographies of Carole Landis and Wallace Reid, among other books. He lived in the country in Connecticut.

Introduction: Someone Worth Remembering      1 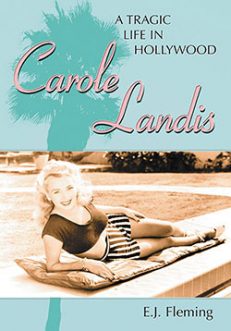