The Civil War Diaries and Letters of John Newton Chamberlin

“I have stood by their side in the grim conflict,” wrote Union Captain John Chamberlin of the Corps d’Afrique. “Woe to the nation that long withholds their rights from them.”
Chamberlin spent nearly five years in the South during and after the Civil War. A well read, observant and articulate writer, he recorded his unique perspective as a commander of black soldiers and engineers. More than everyday accounts of camp life and battles, Chamberlin’s letters and diaries —here presented in historical context—give an insider’s view of the Union army’s relationship with black troops and of the political and social implications of wartime events. Late in the war, his correspondence focused on a schoolmate, Anna Bullock, and their burgeoning relationship.

4. Control of the Mississippi River 33

9. Changes for the Black Soldiers 77

10. The Presidential Election and the War 87

A. The Chamberlin and Bullock Documents: A Brief History 161

B. Order for Service in the Corps d’Afrique 162

“Chamberlin’s detailed diary and letters comprise perhaps a unique firsthand record of the service of black engineers in the western and Trans-Mississippi theaters, with the eloquence of the writer’s political and social commentary an added benefit to the modern reader. Well read Civil War students are always looking for something fresh and new, and this volume certainly possesses those sought after qualities”—Civil War Books and Authors; “This history is unique in that it is an account of life amongst African American soldiers. A very detailed account of their activities…a well presented and excellent portrayal of a little discussed aspect of Civil War history. The reader will gain much insight into a common man serving in an obscure unit, in a remote region, whose service is largely unheralded, despite the fact that their performance was a vital part of Union efforts. Highly recommend[ed]”—Civil War News. 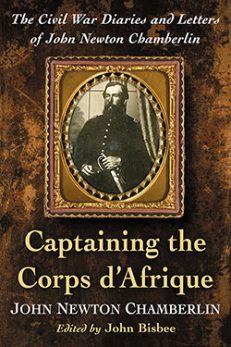 You're viewing: Captaining the Corps d’Afrique $29.95
Add to cart