The Team Behind His Silent Films

Buster Keaton told an interviewer in 1965, “When I’m working alone, the cameraman, the prop man, the electrician, these are my eyes out there…. They knew what they were talking about.” Drawn from film trade magazines, newspapers, interviews and public records, this book tells the previously unpublished stories of the behind-the-scenes crew who worked on Keaton’s silent films—like Elgin Lessley, who went from department store clerk to chief cameraman, and Fred Gabourie, who served as an army private in the Spanish American War before he became Keaton’s technical director.
“I’d ask, ‘Did that work the way I wanted it to?’ and they’d say yes or no,” Keaton said of his crew. He couldn’t have made his films without them.

Lisle Foote is a contributing writer to the International Buster Keaton Society’s magazine, the Keaton Chronicle. She works as the Film and Television Archive Assistant at the Southern Regional Library Facility at the University of California–Los Angeles.

The Camera and Electrical Departments 5

Best Film Book—Huffington Post
“If you love Buster Keaton’s silent comedies this book is for you. Foote has done an impressive amount of homework…this is scholarship at its finest…this book is an important addition to the Keaton bookshelf”—Leonard Maltin.com; “the first book-length study examining the contributions of those who helped Keaton redefine screen comedy…one of the most important cinema studies ever to be published. It offers a unique, definitive fascinating look at the team who helped the greatest comedy filmmaker create some of the most important cinematic works in motion picture history. Recommended”—Examiner.com. 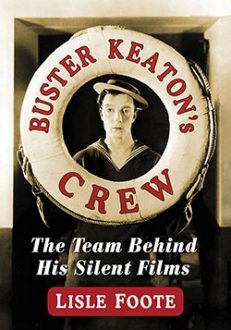