A Study of Twentieth Century Fictions of Home

Despite its cozy image, the bungalow in literature and film is haunted by violence even while fostering possibilities for personal transformation, utopian social vision and even comedy. Originating in Bengal and adapted as housing for colonialist ventures worldwide, the homes were sold in mail-order kits during the “bungalow mania” of the early 20th century and enjoyed a revival at century’s end. The bungalow as fictional setting stages ongoing contradictions of modernity—home and homelessness, property and dispossession, self and other—prompting a rethinking of our images of house and home. Drawing on the work of writers, architects and film directors, including Katherine Mansfield, E. M. Forster, Amitav Ghosh, Frank Lloyd Wright, Willa Cather, Buster Keaton and Walter Mosley, this study offers new readings of the transcultural bungalow.

Mary Lou Emery is Professor Emerita in the Department of English at the University of Iowa. Author of two previous books, plus critical essays and book chapters in British, Caribbean, and transnational modernism, she lives in Portland, Oregon.

• “The argument ranges from colonial British India to 21st century Oregon, across texts as seemingly disparate as Forster’s Howards End, Ghosh’s The Glass Palace, Cain’s Double Indemnity, and Keaton’s One Week, and does so with a keen eye for textual detail and pattern…. A timely addition to a growing field.”— Mary Wilson, University of Massachusetts Dartmouth

• “The author adds to conversations about the ‘spatial turn’ in literary studies, especially modernist studies…. The historical background and movement of the bungalow from the Indian colonies to the US is also fascinating, and provides a rich invitation to think about modern US housing forms in a global context.”—Ria Banerjee, Guttman Community College, CUNY 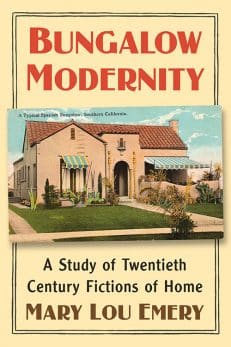