Bump Elliott, the Michigan Wolverines and Their 1964 Championship Football Season

Under the leadership of head coach Bump Elliott, the 1964 Wolverines won Michigan’s first Big Ten championship since 1950 and their first Rose Bowl since 1951, and finished fourth in the national college football polls. They defeated four top-ten ranked teams: Navy, Michigan State, Ohio State, and Oregon State, their Rose Bowl opponent. The Wolverines also defeated Minnesota for the first time since 1960, and reclaimed the prized Little Brown Jug.
Despite its impressive record, the 1964 team failed to attract the national attention it deserved. At the beginning of the season, few football observers expected Michigan to contend for the Big Ten championship. But by the end of the season it was clear that the Wolverines were one of America’s elite teams—perhaps the best in the country.
This book chronicles for the first time the exploits of Michigan’s 1964 team and gives them long-overdue recognition.

E. Bruce Geelhoed is a professor of history at Ball State University in Muncie, Indiana where he teaches courses in the Honors College and also a course in American business history.

Introduction: 1964, a Season of Breakthroughs 5

One Quickness and Agility: Building the ’64 Michigan Team 25

Three One Step Forward, One Step Back 69

Four Two Steps Up the Ladder 98

“Geelhoed delivers a masterfully chronicled tribute to one of the great (and unappreciated) U-M teams of all-time. This is required reading for Michigan football fans.”—Greg Dooley, Michigan Football Historian 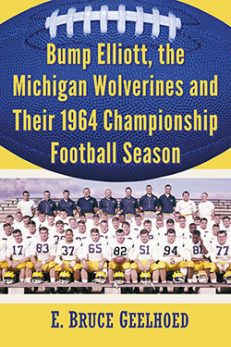 You're viewing: Bump Elliott, the Michigan Wolverines and Their 1964 Championship Football Season $29.95
Add to cart