The numerous anti-bullying programs in schools across the United States have done little to reduce the number of reported bullying instances. One reason for this is that little attention has been paid to the role of the media and popular culture in adolescents’ bullying and mean-girl behavior.
This book addresses media role models in television, film, picture books, and the Internet in the realm of bullying and relational aggression. It highlights portrayals with unproductive strategies that lead to poor resolutions or no resolution at all.
Young viewers may learn ineffective, even dangerous, ways of handling aggressive situations. Victims may feel discouraged when they are unable to handle the situation as easily as in media portrayals. They may also feel their experiences are trivialized by comic portrayals. Entertainment programming, aimed particularly at adolescents, often portray adults as incompetent or uncaring and include mean-spirited teasing. In addition, overuse of the term “bully” and defining all bad behavior as “bullying” may dilute the term and trivialize the problem.

Patrice A. Oppliger is an assistant professor of mass communication at Boston University. She is the author of books on gender and social issues and lives in Cambridge, Massachusetts. 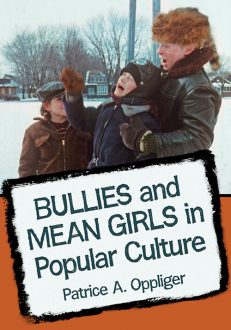 You're viewing: Bullies and Mean Girls in Popular Culture $39.95
Add to cart