Bud Selig and the Return of Major League Baseball to Milwaukee

When the Milwaukee Braves moved to Atlanta after the 1965 season, many impassioned fans grew indifferent to baseball. Others—namely car dealer Bud Selig—decided to fight for the beloved sport. Selig formed an ownership group with the goal of winning a new franchise. They faced formidable opposition—American League President Joe Cronin, lawyer turned baseball commissioner Bowie Kuhn, and other AL team owners would not entertain the notion of another team for the city.
This first ever history of baseball’s return to Milwaukee covers the owners, teams and ballparks behind the rise and fall of their Braves, the five-year struggle to acquire a new team, the relocation of a major league club a week prior to the 1970 season and how the Brewers created an identity and built a fan base and a contending team.

The late Chris Zantow was a writer of training materials and resources for adult learners at American Girl. A member of the Wisconsin Writers Association, he lived in Madison, Wisconsin. 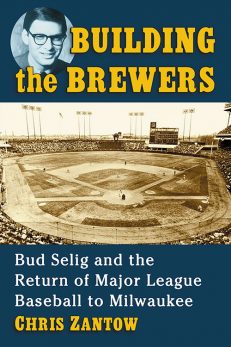 You're viewing: Building the Brewers $29.95
Add to cart