Buffy the Vampire Slayer earned critical acclaim for its use of metaphor to explore the conflicts of growth, power, and transgression. Its groundbreaking stylistic and thematic devices, boldness and wit earned it an intensely devoted fan base—and as it approached its zenith, attention from media watchdog groups and the Federal Communications Commission. The grim and provocative evolution of the show over its final two seasons polarized its audience, while also breaking new ground for critical and philosophical analysis. The thirteen essays in this collection, divided into the perspectives of feminist, cultural, auteur and fan studies, explore the popular series’ conclusion, providing a multifaceted examination of Buffy’s most controversial two seasons.

James B. South is associate professor and chair of the philosophy department at Marquette University in Milwaukee, Wisconsin.

Section 3. Story (Flesh, Style and Purpose)
Buffy and the Death of Style
MICHAEL ADAMS      83
“Set on This Earth Like a Bubble”: Word as Flesh in the Dark Seasons
RHONDA V. WILCOX      95
Bodies and Narrative in Crisis: Figures of Rupture and Chaos in Seasons Six and Seven
GREGORY ERICKSON AND JENNIFER LEMBERG      114
Reality Bites: Buffy in the UPN Years
LYNNE Y. EDWARDS AND CARLY HAINES      130 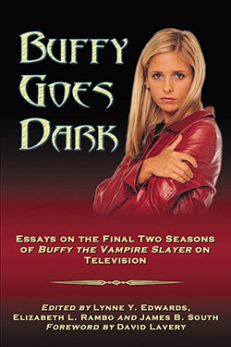