Buffy and the Heroine’s Journey

Vampire Slayer as Feminine Chosen One

The worlds of Percy Jackson, Harry Potter, and other modern epics feature the Chosen One—an adolescent boy who defeats the Dark Lord and battles the sorrows of the world. Television’s Buffy the Vampire Slayer represents a different kind of epic—the heroine’s journey, not the hero’s.
This provocative study explores how Buffy blends 1990s girl power and the path of the warrior woman with the oldest of mythic traditions. It chronicles her descent into death and subsequent return like the great goddesses of antiquity. As she sacrifices her life for the helpless, Buffy experiences the classic heroine’s quest, ascending to protector and queen in this timeless metaphor for growing into adulthood.

Valerie Estelle Frankel teaches English at Mission College and San Jose City College. The author of 75 popular culture books and more than 100 stories and essays, she lives in Sunnyvale, California.

Review Fix chats with author Valerie Estelle Frankel, who lets us know what makes Buffy The Vampire Slayer a special character and more in her book, Buffy and the Heroine’s Journey.

Valerie Estelle Frankel: I had just published my first really-published book–From Girl to Goddess: The Heroine’s Journey through Myth and Legend (to date, the work that gets the most fan interest). I was excited and looking for more projects, so I met McFarland at a convention. I asked the editor at the McFarland exhibit booth if they wanted another goddess-related mythology book. He said, “Actually, we do more TV,” and pointed to a shelf of Buffy books. I instantly perked up. “I can write one of those!” As it happened, I’d been watching Buffy my first time through while doing all the research into how women’s epics have always gone, so I had the observations all ready.

Review Fix: Why do you think Buffy has endured so much?

Frankel: Its humor and cleverness. With its uncompromising, strong, smart heroine, it really did something special.

Review Fix: Who’s your favorite Buffy character and why?

Frankel: I close-watched the series, and took notes through my filter of the heroine’s journey. (I read all the commentary too and finally got to Angel.)  Every time someone faces her dark side (embodied in Glory, the First Slayer, Dark Willow, the First, etc) or dies and returns, that’s the classic mythic pattern. The hero’s or heroine’s journey is all about facing one’s Shadow, the repressed nature that’s been buried and rejected from the conscious self—the rage, hatred, fear and other primitive emotions. Doing so helps the questor become more balanced and struggle towards maturity.

Review Fix: What did you learn about Buffy through the writing process that you weren’t expecting?

Frankel: I was really struck by the depth of the symbolism in some scenes. Some Jungians maintain that the Shadow contains the shadow of society, its neglected and repressed collective values. The demon-infested alleys and sewers of Sunnydale are manifestations of this. Further, from Buffy’s point of view, the demon world is the “real” world, while the sunny world of American middle-class culture is a façade. Saving teens’ lives from dangers the adults dismiss is her real calling. Through seven years, there’s so much more beneath the surface, as in the dream episode “Restless,” that viewers aren’t consciously aware of.  And it’s all neat to discover. At one convention, a fan asked me what I thought the metaphor behind Buffy’s evil boyfriend in season two was, and Jane Espenson, sitting beside me, turned interestedly to hear my answer. Now that was fun.

Frankel: To celebrate Whedon’s work while revealing its depth. Also to provide a guide to writing heroine’s journey stories for the next cool shows that followed.

Frankel: I have lots more Whedon-related books: Joss Whedon’s Names: The Deeper Meanings behind Buffy, Angel, Firefly, Dollhouse, Agents of S.H.I.E.L.D., Cabin in the Woods, The Avengers, Doctor Horrible, In Your Eyes, Comics and More; The Comics of Joss Whedon: Critical Essays; Everything I Need to Know in Life I Learned from Joss Whedon; and the massive tome Pop Culture in the Whedonverse. After so much time comparing all his creations, including the lost Parenthood episodes and comics like Sugarshock and Fray, I’m looking forward to the new HBO series. 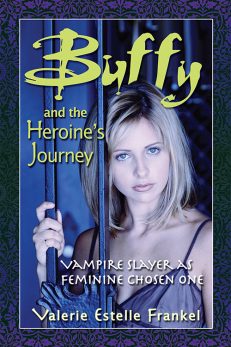 You're viewing: Buffy and the Heroine’s Journey $29.95
Add to cart