Bucking the Railroads on the Kansas Frontier

The Struggle Over Land Claims by Homesteading Civil War Veterans, 1867–1876

As the Civil War ended, thousands of Union veterans imagined Kansas as a place to make a new beginning. Many veterans settled in the southeastern part of the state. In their struggle to establish lawful, ordered communities the settlers came into conflict with railroads intent on building through southeast Kansas to reach warm-water ports in Texas.
To the settlers the railroads represented both a promise and a threat. By linking farmers and businessmen with eastern markets, the railroads guaranteed the prospects of economic gain. However, when they claimed rights to the land that settlers had already claimed, railroad monopolies were identified as a new manifestation of the same threat to republican values they had fought against in the recently concluded War. This book tells the story of the settlers’ opposition to and victory over railroads and the impact on the evolution of political thought in Kansas and the American west.

John N. Mack teaches history for the University System of Georgia as an online lecturer in history at Georgia Perimeter College. A resident of Lawrence, Kansas, he has published and lectured extensively on the history of Kansas and the west.

Introduction: The War That Had No End—Veterans as Settlers 7

“Offers fresh insight into the post–Civil War U.S….recommended”—Choice; “outstanding…an important contribution to our understanding of how veterans envisioned and created a society based on their interpretation of the Civil War. This is an extremely well-written monograph that makes for an enjoyable and entertaining read”—Civil War Book Review; “a treasure trove of rich, insightful quotations, skillfully contextualized with insights drawn from social, political, and cultural histories…fascinating…enjoyable”—Kansas History: A Journal of the Central Plains; “this detailed work examines the roles of the Union veterans who had travelled west, their 11 year struggles against the railroad monopolies, and their relations with the Osage Native Americans and the women settlers”—Reference & Research Book News. 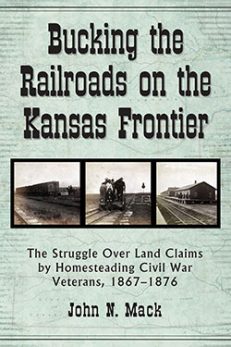 You're viewing: Bucking the Railroads on the Kansas Frontier $39.95
Add to cart