A Handbook for Historians

A huge amount was published about chess in the United Kingdom before the First World War. The growing popularity of chess in Victorian Britain was reflected in an increasingly competitive market of books and periodicals aimed at players from beginner to expert. The author combines new information about the early history of the game with advice for researchers into chess history and traces the further development of chess literature well into the 20th century.
Topics include today’s leading chess libraries and the use of digitized chess texts and research on the Web. Special attention is given to the columns that appeared in newspapers (national and provincial) and magazines from 1813 onwards. These articles, usually weekly, provide a wealth of information on early chess, much of which is not to be found elsewhere. The lengthy first appendix, an A to Z of almost 600 chess columns, constitutes a detailed research aid. Other appendices include corrections and supplements to standard works of reference on chess.

Tim Harding played for Ireland at the 1984 FIDE chess olympiad in Thessaloniki. He is a FIDE Candidate Master and a Senior International Master of correspondence chess. He is a former editor of Chess Mail magazine and for almost 20 years he contributed monthly articles in “The Kibitzer” series at www.chesscafe.com. He lives in Dublin, Ireland.

Preface and Acknowledgments 1
Abbreviations and Annotation Symbols 5
Notes on Old British Money and on Chess Notation 6
1. The Earliest Chess Editors: Egerton Smith and Thomas Wakley 7
Definition of a Column 12
Some Notes on Bibliographies 14
Early Reporting of Chess Events 17
The First Chess Editor: Egerton Smith 19
Thomas Wakley and The Lancet 23
2. The Heyday of Walker and Staunton 25
Early Years of Chess at Bell’s Life in London 25
Illustrated London News: The Early Years 28
Some Other Pre–1850 Columns 33
More Columns in the 1850s 35
Early Chess in The Field 41
The Chess Column of The Era 42
3. The Golden Age of Chess Columns, ca. 1860–1885 44
Wormald’s Start in Chess Journalism 45
The Illustrated Weeklies 46
A Fine Column: Land and Water 52
Heyday of the Field Column 58
Steinitz’s Other Columns 66
Columns in Various Periodicals 67
Chess in School Magazines 73
Bird’s Innovative Chess Column 76
Nottingham Newspapers 80
Confusions over Newcastle Papers 83
Early Scottish Columns 85
Welsh Columns 87
Irish Chess Columns 89
4. Latter Years of the Chess Column 97
“Captain King” and the Rise of Syndication 98
Hoffer at The Field (and Elsewhere) 100
Muddle Over The Standard 103
Later Years at The Field 106
Some Complicated Columns 108
Gunsberg as Columnist 113
Later Years at the Illustrated London News 118
Chess Columns in More Recent Days 119
5. A Short History of Chess Magazines Up to 1914 121
The Earliest Chess Periodicals 123
Early Rivals to the Chronicle 127
The Chess Player’s Magazine 133
The Chess World 138
The Westminster Papers 142
The City of London Chess Magazine 145
Other English Magazines of the 1870s 154
Hoffer and Zukertort’s Magazine 157
American Magazines of the 1870s and 1880s 160
Early Years of the British Chess Magazine 164
Other Late Victorian Magazines 168
Other Edwardian Chess Magazines 174
6. The Saga of the Chess Player’s Chronicle 178
The Short Life of The British Miscellany 178
The Early Years of Staunton’s C.P.C. 192
Brien’s Tenure of the Chronicle 202
The Third Series 206
Skipworth and the Quarterly Chronicle 211
The Jenkin Interlude 214
The Ranken Years 216
Morgan Takes Over in 1881 218
The Final Series 225
7. A Century and a Half of British Chess Books 231
Earliest British Chess Books 232
The Era of Philidor 235
Sarratt and Cochrane’s Treatises 237
General Manuals from Lewis to Staunton 240
Early Game Collections 246
Jaenisch on the Openings 249
Problems and Studies 251
Miscellaneous Works 253
Later Game Collections and Tournament Books (1851 onwards) 255
Later Books about Problems 258
History and Culture of Chess 264
Books on the Openings 266
Annual Works and Directories 273
8. On Doing Chess History Today 275
On Archives, Libraries and Private Collections 276
The Murray Collection in Oxford 282
Genesis of the Chess Column List 287
About Digitization and Online Research 288
On Websites and Game Databases 289
The Uses of Genealogy 292
A Few Final Words 293
Appendices
I. British and Irish Chess Columns to 1914: An Annotated List 297
II. British and Irish Chess Magazines, 1837–1914: A Summary 341
III. Some Corrections to The Oxford Companion to Chess 344
IV. Table of Contents
of The British Miscellany 346
V. Some Amendments to Gaige’s Chess Personalia 349
VI. The Chess Column of Our School Times 352
Chapter Notes 355
Bibliography 369
MSS in archives 369
Unpublished works 369
Secondary and reference works 369
Online Services and Useful Weblinks 370
Other works by the present author 370
Index of Games 371
General Index 372

• Book of the Year Award—Chess Journalists of America

• “Seldom a chess book has impressed so much as this latest work from Tim Harding on British chess literature…. Uncountable in this are Tim Harding’s research discoveries which bring the reader back in time…a must have chess book!”—Chessbooks.nl

• “The book is the result of fifteen years of research, and the author has dug up considerable new information…fascinating”—Chess Book Chats

• “Who would have known that the history of British chess could be so rich and diverse? This book certainly provides a wealth of information related to this topic prior to 1914. Definitely a book for chess enthusiasts”—ARBA

• “A great deal of information in the book, much of it highly interesting…a fine book…invaluable.”—Quarterly for Chess History 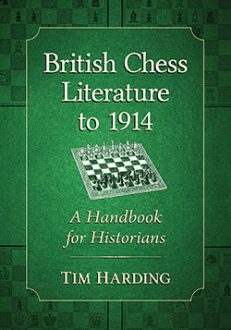