Perhaps more than all the campaigns of the Union armies, the Union naval blockade—covering all major Southern ports along 3,500 miles of coastline for the duration of the war—brought down the Confederacy. The daring exploits of Confederate blockade runners are well known—but many of them were British citizens operating out of neutral ports such as Nassau, Havana and Bermuda.
Focusing on British involvement in the war, this history names the overseas bankers and manufacturers who, in critical need of cotton and other Confederate exports, financed and equipped the fast little ships that ran the blockade. The author attempts to disentangle the names and aliases of the captains—many of whom were Royal Navy officers on temporary leave—and tells their stories in their own words. 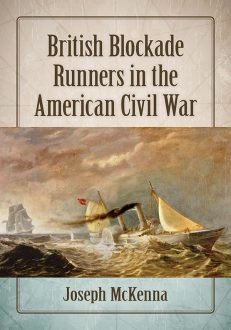 You're viewing: British Blockade Runners in the American Civil War $49.95
Add to cart