Bonds of Brotherhood in Sons of Anarchy

Essays on Masculinity in the FX Series

One of FX’s most successful original productions, Sons of Anarchy roared onto the screen in 2008 and dominated the cable network’s programming for seven seasons. Following an outlaw motorcycle club on its Shakespearean journey, the series took audiences on a wild ride powered by a high-octane brand of masculinity. This collection of new essays explores the show’s complicated presentation of masculinity and its cultural implications. Series creator and writer Kurt Sutter depicts male characters who act from a highly traditional sense of what it means to be a man. SOA both vaunts and challenges that sense of manhood as the characters face the consequences of their ride-or-die lifestyle.

Susan Fanetti is a professor of English at California State University, Sacramento, where she serves as Coordinator of the English Education program and teaches courses in teaching English Language Arts and in American literature, genre literature, composition, and popular culture. Her scholarship tends to explore the intersections of teaching and popular culture. 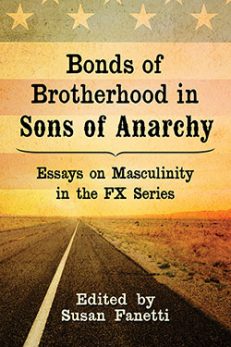 You're viewing: Bonds of Brotherhood in Sons of Anarchy $39.95
Add to cart