From early childhood singing in church to the rock ’n’ roll limelight of Derek and the Dominos, Bobby Whitlock launched a musical journey still going to this day. Whitlock’s life story does more than share rock gossip about stars like Keith Moon, George Harrison, and Eric Clapton, however. Whitlock candidly discusses his abusive childhood, his experiences with Delaney and Bonnie, failed marriages, and drug addiction, and how the star-studded lifestyle evolved into a peaceful partnership with his wife and musical partner.

Bobby Whitlock was an original member of the rock band Derek and the Dominos and played on George Harrison’s first solo album, All Things Must Pass. He’s written numerous songs performed by such artists as George Jones and Sheryl Crow. He now lives with his wife and musical partner, CoCo Carmel.

Marc Roberty has written more than 30 books, a number of them about Eric Clapton, including The Complete Recording Sessions. His articles and features have been published in Rolling Stone, Mojo, Best, Financial Times, and more. 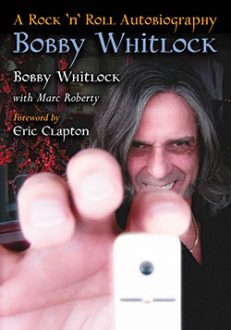