The Urban Rivalry That Killed Major League Baseball in Montreal

The 2001-2002 offseason was a tumultuous one for Major League Baseball. The commissioner’s move to contract two teams, voted on and approved by league owners in a 28-2 vote, left fans in several cities fearing for the future of their teams. The Montreal Expos, with a recent history of poor play and even poorer attendance, seemed an obvious choice. Canada’s only other big league franchise, the Toronto Blue Jays, had voted in favor of the commissioner’s proposal but seemed as likely a candidate as either of the teams targeted by owners. This book examines the 2002 season of the Expos and the Blue Jays, setting events against the backdrop of a long-nurtured urban rivalry between Montreal and Toronto. Chapters cover the summer of 2002 month-by-month, supplementing on- and off-field events with a wealth of historical background and showing how competition placed the Expos and Blue Jays as well as their two host cities on permanently divergent paths.

“chock-full of a wide range of interesting information”—Montreal Gazette. 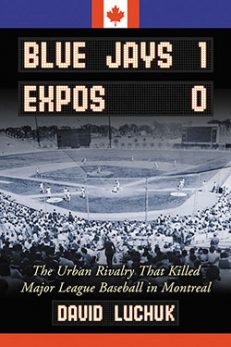