Blood in the Moonlight

Director and screenwriter Michael Mann is the creative force behind such movies as Last of the Mohicans and Ali. Markedly reticent, Mann prefers that his personal background remain an enigma, but his disparate films contain clear and consistent messages. One of Mann’s focuses is on the Information Age. He addresses the nature of modern communication, its use to manipulate and coerce, and the resultant subjugation of truth. The perils inherent in modern technology and communication stand in stark contrast to the power of symbolic and oral exchange, the trusted medium of Mann’s protagonists.
This critical exploration of the films of Michael Mann examines his recurring focus on the nature of modern communication and information and their effect on the individual and society. Mann’s films highlight the struggle to maintain a connection to reality in a world where information is a commodity manipulated and abused by forces that exert increasing control over its content and dissemination. Each chapter examines one of Mann’s films—including Manhunter, The Keep, Last of the Mohicans, The Insider and Ali—in which the protagonist longs for a sense of human connection but is pitted against forces that devalue and destroy individuality. Photographs illustrate specific moments from the films. A bibliography and an index are included.

Mark E. Wildermuth is an associate professor of English at the University of Texas in Odessa. He lives in Odessa, Texas.

6. Translating Ritual Time and Symbolic Exchange: Colonialism and Nationalism in The Last of the Mohicans (1992)      115 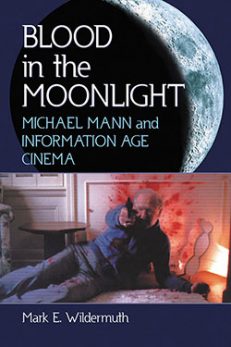 You're viewing: Blood in the Moonlight $35.00
Add to cart