By the time of the American Revolution, blacks made up 20 percent of the colonial population. Early in colonial history, many blacks who came to America were indentured servants who served out their contracts and then settled in the colonies as free men. Over time, however, more and more blacks arrived as slaves, and the position of blacks in colonial society suffered precipitous decline.
This book discusses the lives of blacks, both slave and free, as they struggled to make homes for themselves among the white European settlers in the New World. The author thoroughly examines colonial slavery and the laws supporting it (as early as 1686, for example, New Jersey had laws demanding the return of fugitive slaves) as well as the emancipation movement, active from the beginning of the slave trade. Other topics include blacks and the practice of Christianity in the colonies, and the service of blacks in the Revolution.

The late Oscar Reiss, was a retired physician and the author of The Jews in Colonial America (2004) and Medicine and the American Revolution (1998). He lived in San Diego.

6 Africans in the Middle Atlantic Colonies     79

“recommended”—Library Journal; “[a] wealth of detail”—Choice; “one of the few books to focus on slavery and racism in 17th- and 18th-century America…rich in detail and documentation”—C&RL News; “touches upon many important aspects of human bondage in the colonial period”—The Journal of American History. 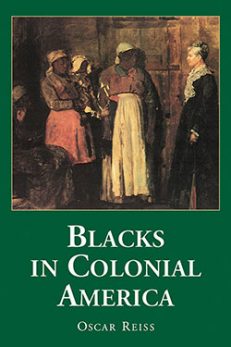 You're viewing: Blacks in Colonial America $29.95
Add to cart