A comprehensive filmography, this book is composed of lengthy entries on about 75 films depicting legendary New Mexico outlaw Billy the Kid—from the lost Billy the Kid (1911) to the blockbuster Young Guns (1988) to the direct-to-video 1313: Billy the Kid(2012) and everything in between. Each entry gives a synopsis, cast and credits, critical reception, and a discussion of the events of the films compared to the historical record. Among the entries are made-for-TV and direct-to-video films, foreign movies, and continuing television series in which Billy the Kid made an appearance.

Johnny D. Boggs, former newspaper writer, is an award-winning author of Western fact and fiction. He has contributed to such magazines as True West and Boys’ Life. A past president of the Western Writers of America, he is based in Santa Fe, New Mexico. 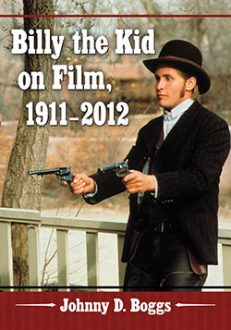