From the time conference play began in 1905, the Big Ten was the Western force in collegiate basketball. Minnesota, Wisconsin and Purdue were the first powers in the league, with a combined 23 titles by 1930. Purdue was dominant in the ’30s, with seven titles under Coach Piggy Lambert, including a national title in 1935 led by player of the year John Wooden. The creation of a national tournament in 1939 showed the league’s early dominance, as a different Big Ten team went to the Final Four in each of the first three years, with two wins.
Over the next 30 years, the league produced some of the top teams in the country, led by Hall of Fame coaches like Branch McCracken, Walter Meanwell, Dutch Lonborg, Harold Olsen and Fred Taylor. Top players emerged from the conference, like Jerry Lucas, Cazzie Russell, John Havlicek, Terry Dischinger, Walt Bellamy, Johnny Green, Lou Hudson, Archie Clark and a host of others. This book provides the first-ever basketball history of the Big Ten.

A professor emeritus of education and American studies at Penn State University, Murry R. Nelson has written histories of the New York Celtics, the American Basketball League, and the National Basketball League, as well as biographies of Bill Russell and Shaquille O’Neal.

“Big Ten fans will appreciate Nelson’s thorough research…. It is the kind of book that die-hard Big Ten loyalists will enjoy, especially because the period covered cannot be found easily on the Internet, making it the only resources on the league’s early years…valuable”—Sport in American History.

Review Fix chats with author Murry Nelson, who discusses the creative process behind his book Abe Saperstein and the American Basketball League, 1960–1963: The Upstarts Who Shot for Three and Lost to the NBA and his other work on basketball, as well as what the future holds for him.

Murry Nelson: Each of my books was inspired by a desire to read and know more about the topics and an inability to find a book that addressed each of these topics. I had been interested in the NBL since I’d first read about the BAA-NBL merger, probably in the late 1960s, but was inspired to write the book after writing a letter to Sports Illustrated trying to correct their perpetuation of the NBA’s myth that their 50th anniversary was 1996, since the BAA was formed in 1946. As I noted in the letter, either the anniversary should have been 1987 when the NBL began or 1999 when the NBL merged with the BAA. Dick Triptow, a former NBL great and teammate of George Mikan on both teams at DePaul University and the Chicago Gears of the NBL contacted me to applaud my letter and support exactly what I had written. With his impetus and assistance in visiting archives, talking to former players and reading newspapers from former NBL sites like Oshkosh and Sheboygan, I determined to write this book.

As for the ABL book, I grew up in Chicago and was aware of the ABL’s existence in the 1960s, but was more tied to the Chicago Packers, who joined the NBA in 1961 because of knowing the owner of the team, Dave Trager. Still, Connie Hawkins, the 3-point shot and the mere existence of the league intrigued me and I wanted to know more. The only way to do that was to do the research and the book emerged from that.

Regarding the Big Ten volume, I had grown up, as noted earlier, in Chicago and the Big Ten was my college league, as it were. I wanted to kind of relive those early years of high school attending Northwestern games with high school teammates and then following the league’s growth, but, again, there was no book that did this, so I did the research out of my own interest and the book fell into place.

Nelson: All three books relied on extensive reading of microfilm newspapers. For the ABL, they were the Chicago Tribune, PittsburghPost-Gazette, Kansas City Star, Kansas City Time and Philadelphia Inquirer. For the NBL, I used the Chicago Tribune, but smaller papers from a number of the small cities of the NBL like the OshkoshNorthwestern, the Rochester Democrat and Chronicle, the Akron Beacon Journal, the Denver Post, the Minneapolis Star, the Indianapolis Star, the Fort Wayne News-Sentinel, the Toledo Blade and the Chicago Defender. For the Big Ten, the Chicago Tribune was most utilized, but also the New York Times, the Des Moines Register, the Minneapolis Star, the Detroit News and the Daily Illini. Most were online and were easy to use for finding supporting documents after finding stories in the Chicago Tribune microfilm copies. I also utilized a number of annual basketball magazines that I had saved for more than fifty years, updating these annually. Interviews with former players, coaches and team personnel, including owners and league officials, were also vital. For both the ABL and NBL books I visited a number of archival sites, including the Naismith Memorial Basketball Hall of Fame. The Abe Saperstein papers in the archives at the Briscoe Center for American History at the University of Texas were key. For the NBL, I used archives in Oshkosh, Sheboygan, Akron and the HOF. The Big Ten said it did not keep such archival data so I had to rely on archives from the various Big Ten institutions and archivists there. Interviews were done in person, by phone and via email for all three books. I did get a couple great letters, one of which was from John Wooden, discussing his play in the NBL and its predecessor, the Midwest Conference.

Review Fix: Any real trials and tribulations during the writing process?

Nelson: The writing was like a reward for all the research data gathered. I wanted to read the story of each league, but I had to write it to read it. The biggest tribulation was probably having to limit my writing each day because of being tired, but, lying in bed each night wondering what would happen next in “the story” that I was telling.

Review Fix: What did you learn during the writing of the book that you didn’t expect?

Nelson: In the NBL book, I was surprised by the accurate memories of those individuals whom I interviewed. Almost always, their memories coincided precisely with the data that I had gathered from other sources and their insights added so much color and insight to the newspaper accounts.

Nelson: My goals for the NBL book were simple, initially, i.e. to correct the NBA myths about the origin of the NBA and to give the NBL players and teams the respect and attention that they deserved. As for the ABL, I wanted to both learn more about the league’s operating and to clear up the confusion that many people had with the ABL and the ABA.

Nelson: All three books are heavily footnoted, but that is the scholarly aspect. I think a basketball aficionado would be the prime audience, i.e. someone interested in the growth and development of basketball over the years. The writing style is pretty straightforward and the books don’t require lots of baseline knowledge as much as an interest in learning more about basketball history, as just noted.

Review Fix: How does your background help and hinder your creative process?

Nelson: I have been interested in basketball history since high school and that interest is probably the most important part of writing such a book. I also have a social science background with degrees in sociology, anthropology, education and a year of law school, all of which helps me to contextualize the books with the larger framework of American history at the time that the books are describing.

Nelson: I am completing a second volume on Big Ten basketball from 1972-1992, which I hope McFarland will publish in 2020.

Nelson: I cannot say enough about the people who have helped me write these books-librarians, archivists, editors, but mostly the former players. Interviewing them was a thrill and an honor. Dick Triptow became a valued friend through the NBL work and John Isaacs of the New York Renaissance team also became a close confidant and critic. I miss them both very much. 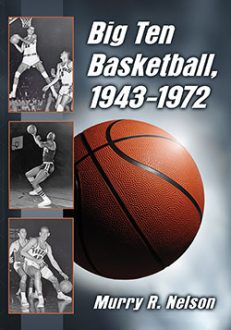