Decades before the Salem Witch trials, 11 people were hanged as witches in the Connecticut River Valley. The advent of witch hunting in New England was directly influenced by the English Civil War and the witch trials in England led by Matthew Hopkins, who pioneered “techniques” for examining witches. This history examines the outbreak of witch hysteria in the Valley, focusing on accusations of demonic possession, apotropaic magic and the role of the clergy. Although the hysteria was eventually quelled by a progressive magistrate unwilling to try witches, accounts of the trials later influenced contemporary writers during the Salem witch hunts. The source of the document “Grounds for Examination of a Witch” is identified.

Acknowledgments v
Preface 1
Introduction 5
1. The English Civil War and the Revival of Witch Hunting in England 11
2. The “old serpent” Disturbs the Peace of the New England Churches 35
3. Settling Windsor in the New England Wilderness 46
4. Conditions in Windsor Increase the Fear of Satan 66
5. Old England and the Origins of Witchcraft in New England 80
6. “The devil is amongst thee now” 102
7. “Ah! Witch! Ah! Witch!” 128
8. “The Devill will have you quick” 149
9. A More Compassionate Magistracy 172
10. “A world of sin was doubtlessly committed” 194
11. “The Glory is departed, & Evill come upon the people of God” 210
12. Demonic Possession and the Witch Hysteria in Hartford 231
13. “They seeke my inocent blood” 265
Appendix: Grounds for Examination of a Witch 277
Chapter Notes 287
Bibliography 313
Index 325

“Ross’s description of New England society is superb…a valuable addition to the vast historical literature relating to witchcraft. A well-researched and well-written account of a forgotten witch-hunt”—Fortean Times. 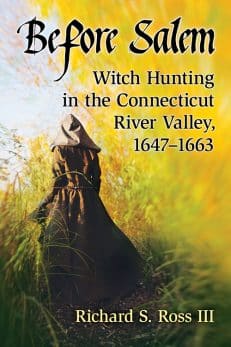