The Western League and American Association Vie for Turf, Players and Profits

In late 1901, a number of baseball owners decided to break away from the Western League and form a new league called the American Association. This “outlaw league” refused to recognize organized baseball’s reserve clause, but vowed to respect contracts. Unfortunately, organized baseball did not reciprocate. Over the next two years, the leagues battled each other for players, fans, and financial superiority. This narrative of that struggle details the business operations of the different clubs, the difficulties of securing property for ball parks, and the problem of players jumping contracts. It also chronicles the two playing seasons during the conflict and describes the rowdy behavior of both players and umpires that characterized baseball at the time. Although the American Association would go on to a longer and more successful life, this study shows that outcome was by no means certain in the early 20th century.

Dennis Pajot is a member of the Society for American Baseball Research and is active on the group’s Nineteenth Century and Deadball Era committees. He is a frequent contributor to The Inside Game, the Deadball Era’s newsletter. He was awarded the Sporting News–SABR Baseball Research Award in 2010 for The Rise of Milwaukee Baseball and lives in Milwaukee.

4. Rowdyism and Umpiring in the Western League and American Association      89 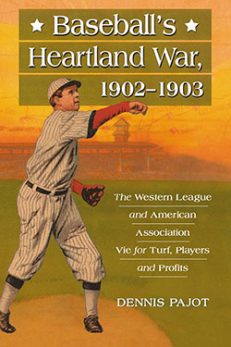