The 1924 Meeting of the Hilldale Giants and Kansas City Monarchs

In 1924, after the Hilldale Giants captured the league crown in the new Eastern Colored League and the Kansas City Monarchs won out in the four-year-old Negro National League, the two teams met in a best-of-nine series for the world championship. But a 13-inning tie in Game 4 and alternating wins throughout would force a tenth and deciding game, making it the longest World Series—black or white—in the modern era.
This heavily illustrated volume provides a comprehensive account of the first championship series played between teams from two all-black professional leagues. It provides commentary, records, and full statistics for each club’s regular season performance, along with biographical profiles of the players. Coverage also includes position-by-position comparisons of the Series combatants; a breakdown of the attendance, gate receipts, and team shares; game-by-game summaries; comments from the players; and complete statistics—including pitcher-batter matchups—for both teams.

Noted Negro League historian Larry Lester is the author of eight books and contributor to more then 175 books, theses, and articles on black sports history. He is a Negro Leagues Baseball Museum co-founder and has long served as chairman of the SABR Negro Leagues Committee. Since 1998, he has organized the annual Jerry Malloy Negro League Conference, the only scholarly gathering devoted to the history of black baseball. Lester was a 2016 recipient of SABR’s Henry Chadwick Award, honoring baseball’s greatest researchers, and a year later received the Bob Davids Award, SABR’s highest honor. He lives in Kansas City, Missouri.

6: Batter versus Pitcher Match-Ups During the World Series      241

“significant”—Sports Collectors Digest; “a well-documented look at the 1924 series. Larry Lester has provided a fascinating and well-researched look into the first Negro League World Series, filling a gap that has existed until now in the literature”—Journal of Sport History; “a wonderful resource”—Black Ball: A Negro Leagues Journal; “heavily illustrated with detailed play-by-plays, box scores and statistics”—The SABR Bulletin. 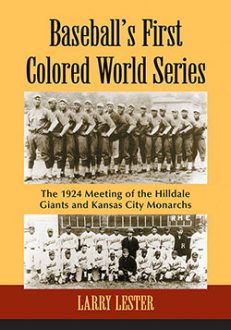