A Chronology of Decisions, Statutes and Other Legal Events

Baseball and law have intersected since the primordial days. In 1791, a Pittsfield, Massachusetts, ordinance prohibited ball playing near the town’s meeting house. Ball games on Sundays were barred by a Pennsylvania statute in 1794.
In 2015, a federal court held that baseball’s exemption from antitrust laws applied to franchise relocations. Another court overturned the conviction of Barry Bonds for obstruction of justice. A third denied a request by rooftop entrepreneurs to enjoin the construction of a massive video screen at Wrigley Field.
This exhaustive chronology traces the effects the law has had on the national pastime, both pro and con, on and off the field, from the use of copyright to protect not only equipment but also “Take Me Out to the Ball Game” to frequent litigation between players and owners over contracts and the reserve clause. The stories of lawyers like Kenesaw Mountain Landis and Branch Rickey are entertainingly instructive.

Ed Edmonds is an emeritus professor at the Notre Dame Law School. He retired in 2016 after having served as law library director at William & Mary, Loyola New Orleans, St. Thomas (MN) and Notre Dame. He has written numerous articles on baseball and antitrust and labor law issues.
Frank G. Houdek is an emeritus professor at Southern Illinois University School of Law. After serving for 30 years as law library director, professor of law, and associate dean for academic affairs at SIU, he retired in 2014. Since then he has pursued his research and writing interests in both baseball and law. 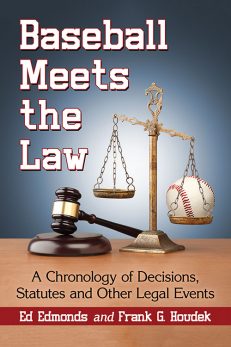 You're viewing: Baseball Meets the Law $39.95
Add to cart