Since 1995, the Indiana State University Conference on Baseball in Literature and American Culture has provided a venue for scholars to present their research on baseball as literary subject matter and cultural institution. Nineteen essays presented at the 2002 and 2003 ISU conferences are published in this work. The essays demonstrate that baseball continues to engage scholars like no other sport, despite the game’s supposed loss of stature as the national game. “A Field of Questions: W.P. Kinsella comes to Ithaca,” reveals Kinsella as baseball fan and baseball writer. “‘You don’t play the angles, you’re a sap’: John Sayles, Eliot Asinof, Baseball Labor, and Chicago in 1919” examines Sayles’ Eight Men Out in the context of both Asinof’s historical account of the fix and Sayles’ earlier and openly labor-oriented film Maetwan. “Is Baseball an American Religion?” considers three codified, sociological definitions of religion and demonstrates that to claim baseball is an American religion requires more than just a strong attraction to the game. “Baseball Immortals: Character and Performance On and Off the Field” analyzes how character and performance impact fan and media perceptions as well as in terms of a player’s candidacy for the Hall of Fame. These are just a few of the essays, which cover a broad range of topics and take a variety of approaches to those topics.

PART I: Baseball in Literature and Film
1 A Field of Questions: W.P. Kinsella Comes to Ithaca      9
2 Jon Billman’s “Indians” and American Indian Exhibition Baseball Teams      19
3 “Dad—Can We Have a Catch?” Images of Fatherhood and Redemption in Three Baseball Films      28
4 Mick Cochrane’s Sport and the Mythic Symbol of Fathers Playing Catch with Sons      39
5 Nelson Algren’s Chicago: The Black Sox Scandal, McCarthyism, and the Truth about Cubs Fans      49
6 “You don’t play the angles, you’re a sap”: John Sayles, Eliot Asinof, Baseball, Labor, and Chicago      60
7 “The proper distance for worship”: Art Worlds and Assimilation Narratives in The Celebrant      76
8 Nine Assists and No Errors: Rediscovering the Baseball Fiction of Charles Van Loan      83 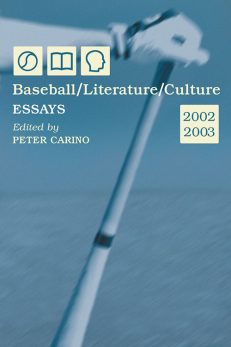 You're viewing: Baseball/Literature/Culture $45.00
Add to cart