The Watershed Season of the National Pastime

In 1939, baseball’s past ran headlong into its future. As the game celebrated its 100th anniversary with the opening of the Hall of Fame in Cooperstown, New York, it learned that the legend of the sport’s origins was purely a myth. On the field, the veteran players who had saved the game after the Black Sox scandal were slowly giving way to a new wave of players, men who would usher in the Golden Age of the game.
Through extensive research, augmented by interviews with such Hall of Famers as Bob Feller, Ernie Harwell, Charlie Gehringer and Monte Irvin, the game’s pivotal season is retold here. The appendix provides a statistical summary of the year.

SABR member Lawrence S. Katz has written on baseball history for the Sports Collectors Digest and The Baseball Research Journal. He is an attorney living in West Bloomfield, Michigan.

“extensive research”—Sports Collectors Digest; “covers a variety of topics…interesting information”—Choice; “a look back at baseball’s centennial season when Ted Williams broke in and the Hall of Fame opened its doors”—USA Today Baseball Weekly; “tells the story of the beginning of the Golden Age of baseball”—Reference & Research Book News. 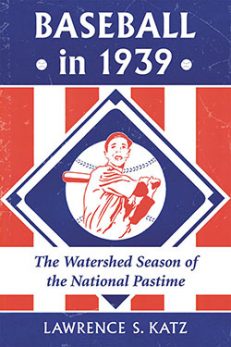