Early baseball in Richmond, Virginia, was very much about business. The game was a means of promoting Richmond and its various industries and attractions, but it was plagued by instability. Competing interests fought for control of its fortunes in the city and changes in team ownership were frequent. The competitors vied to make a profit in any way they could on the game. As time passed, baseball became more established and eventually found its place in the city.
Richmond’s affiliation with baseball, from the years 1884 to 2000, is a fascinating story. The book covers the players and owners, and also for nearly twelve decades the relationship shared by the team and the city. It highlights baseball’s early amateur beginnings in Richmond prior to 1884, the first year of professional baseball in the city in 1884, the revival of the Virginia State League from 1906 to 1914, the Virginia League from 1918 to 1928 and the Eastern League in 1931 and 1932, the Richmond Colts and the Piedmont League from 1933 to 1953, and Richmond’s association with the International League beginning in 1954.

W. Harrison Daniel is a professor emeritus of history at the University of Richmond and the author of Jimmie Foxx: The Life and Times of a Baseball Hall of Famer, 1907–1967 (1996).
SABR member Scott P. Mayer is director of college counseling at St. Christopher’s School in Richmond. 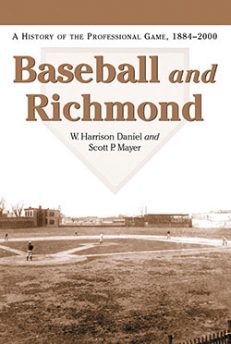 You're viewing: Baseball and Richmond $29.95
Add to cart