BACK ISSUE
This is a single back issue only. To order a current subscription, or for more information, please visit the journal’s web page at https://mcfarland.onpressidium.com/imprint/base-ball-new-research-on-the-early-game/.  Print copies of back issues from volumes 1-6 are available for $30.

John Thorn is the author of countless articles on baseball history and has written, co-written, and edited dozens of baseball books, including The Hidden Game of Baseball, Total Baseball, and The Armchair Book of Baseball. He was founding editor of The National Pastime: A Review of Baseball History and founding publisher of Total Sports Publishing in 1998. Thorn writes “Play,” a regular column for the VOICES, the semiannual publication of the New York Folklore Society, and appears irregularly in the Boston Globe, New York Times and NYTBR. He serves as a publishing and curatorial consultant to the Museum of the City of New York, with whom he created the recently published coffee-table book New York 400. 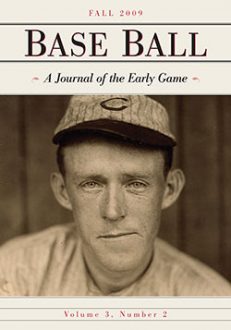