New Research on the Early Game

Offering the best in original research and analysis, Base Ball is an annually published book series that promotes the study of baseball’s early history, from its protoball roots to 1920, and its rise to prominence within American popular culture. This volume, number 10, brings together 14 articles on a wide range of topics, including the role of physicians in spreading early baseball; the game’s financial revolution of 1866, when teams began charging a 25-cent admission price; the prejudice that greeted Japan’s Waseda University team during its American tour in 1905; the Addie Joss benefit game and its place in baseball lore; the 1867 western tour of the National Base Ball Club; and entrenched ideas about class and early baseball, with a focus on the supposedly blue-collar Pennsylvania Base Ball Club.

Don Jensen, a longtime SABR member, is the director of Russia and Strategic Stability at the United States Institute of Peace and an adjunct professor at the Krieger School of Arts and Sciences, Johns Hopkins University. He lives in Alexandria, Virginia.

• “One of the more compelling sports-related publications to come along in a great while…unostentatious, solid, and a great read”—Library Journal

• “The journal both embodies recent trends and provides a forum for expanding upon them. Base Ball thus represents an exciting and important contribution to literature on the sport. John Thorn, a respected historian of early baseball history, is the journal’s editor and Base Ball has a first-rate editorial board and, as a result, already appears poised to be among the finest journals dedicated to the history of sports”—Arete

• “Never comes up short in the quality of its content. In addition to the fine research articles there is a valuable section of book reviews, mostly dedicated to books pertaining to 19th century baseball”—Nineteenth Century Notes

• “An exciting and important contribution to literature on the sport…seeks to chronicle, analyze, and expand our understanding of the game during its long, and seemingly getting longer, pre 1920 phase”—Society for American Baseball Research Bibliography Committee Newsletter 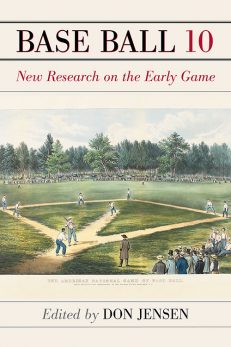