Labor Relations in an Age of Prosperous Turmoil

In 1995, William B. Gould IV, then chairman of the National Labor Relations Board, cast the deciding vote to obtain the injunction that ended the longest strike in baseball history. Sixteen years of peaceful relations between baseball labor and management have followed, as well as unprecedented prosperity in a relationship that had just endured 30 years of strikes and lockouts. This study, which clearly illustrates the practical impact of law on America’s pastime, considers the 140-year sweep of labor-management relationships and conflict, exploring player-owner disputes, the development of free agency, the collective bargaining process, and the racial integration of baseball, among other topics. It concludes with a discussion of the “steroids era,” the problem with maintaining Jackie Robinson’s legacy in the 21st century, and globalization.

William B. Gould IV is an emeritus professor at Stanford Law School and served as chairman of the National Labor Relations Board (NLRB) from 1994 to 1998. He arbitrated the 1992 and 1993 salary disputes between the Major League Baseball Players Association and the Major League Baseball Player Relations Committee. As NLRB chairman, he played a critical role in bringing the 1994-1995 baseball strike to an end.

“If Major League Baseball ever awarded a Nobel Peace Prize, it should go to Bill Gould for effectively ending baseball’s nuclear war, the strike of 1994-95, during his tenure as NLRB Chairman. In his new book, the distinguished law professor has chronicled the game’s history of labor and racial relations from his unique perspective.”—Joe Castiglione, broadcaster, Boston Red Sox; “Professor Gould brings to bear his first-rate scholarly abilities and legal skills as he discusses the law and baseball. I highly recommend this book for those who love the game as he does—and for those who want to learn about its labor disputes as well.”—Dusty Baker, manager, Cincinnati Reds; “[Gould] combines his love for baseball with a comprehensive easy to understand analysis of the history of labor issues existing between the owners and the players…. A must for any fan of the game.”—Marty Lurie, radio host, KNBR 680, Giants Flagship; “It is in the combination of Gould’s knowledge as an interested and intelligent fan with his public and professional life as a scholar, salary arbitrator and Chairman of the NLRB at a crucial time in baseball’s history which gives Bargaining with Baseball its distinctive, innovative and highly insightful cutting edge.”—Braham Dabscheck, Sporting Traditions. 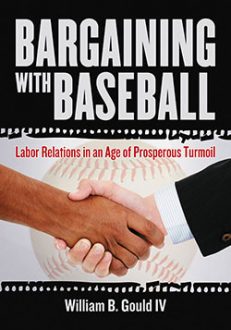 You're viewing: Bargaining with Baseball $39.95
Add to cart