The Life and Films of Virginia Lee Corbin

One of the most popular Hollywood child stars of the late 1910s, Virginia Lee Corbin was well known to fans worldwide. With her mother as her manager, Corbin retained her popularity as she grew older. She performed in vaudeville for a couple of years before continuing her film career. Corbin fit well into the flapper mold of the Jazz Age and appeared in many films throughout the 1920s. As she matured, her mother found it ever more difficult to control her. Corbin led a difficult life. After her mother’s suicide attempt, she found that all the money she had earned was gone. Her marriage (at age 18) failed and she was eventually separated from her children. The flapper struggled to remain relevant in the sound era and was trying to make a comeback when she died at 31 in 1942.

Retired school public relations officer Tim Lussier has had a 45-year passion for silent films. His website, SilentsAre Golden.com, has been one of the most popular silent movie sites on the Internet for the past 20 years. He lives in Whispering Pines, North Carolina.

• “Lussier’s biography fleshes out [information about Corbin’s life] as best as possible, scrounging up reviews, newspaper clippings and magazine articles for each step of Virginia’s busy career. To say this was painstaking work is an understatement, but he managed to piece together a surprisingly detailed—and nicely readable—examination of her life and work.”—Silentology

• “It is always commendable when lesser known performers benefit from the hard work and research of writers and film historians who take the time to explore their life and work. ‘Bare Knees Flapper’ is a quintessential book for anyone interested in film history, and should find a place in any library or research center. Most highly recommended.”—jlneibaur-writer 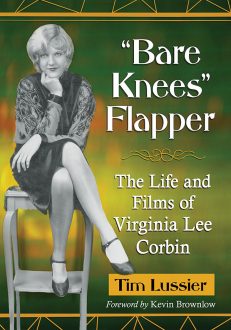