Barack Obama and the Rhetoric of Hope

The historical and literary antecedents of the President’s campaign rhetoric can be traced to the utopian traditions of the Western world. The “rhetoric of hope” is a form of political discourse characterized by a forward-looking vision of social progress brought about by collective effort and adherence to shared values (including discipline, temperance, a strong work ethic, self-reliance and service to the community).
By combining his own personal story (as the biracial son of a white mother from Kansas and a black father from Kenya) with national mythologies like the American Dream, Obama creates a persona that embodies the moral values and cultural mythos of his implied audience. In doing so, he draws upon the Classical world, Judeo-Christianity, the European Enlightenment, the U.S. Constitution and Bill of Rights, the presidencies of Jefferson, Lincoln, and FDR, slave narratives, the Black church, the civil rights movement and even popular culture.

Mark S. Ferrara is an associate professor of English at State University of New York. 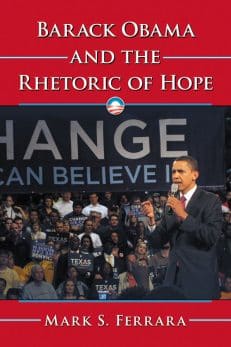 You're viewing: Barack Obama and the Rhetoric of Hope $29.95
Add to cart