The Actors of Film Noir

The film noir male is an infinitely watchable being, exhibiting a wide range of emotions, behaviors, and motivations. Some of the characters from the film noir era are extremely violent, such as Neville Brand’s Chester in D.O.A. (1950), whose sole pleasure in life seems to come from inflicting pain on others. Other noirs feature flawed authority figures, such as Kirk Douglas’s Jim McLeod in Detective Story (1951), controlled by a rigid moral code that costs him his marriage and ultimately his life. Others present ruthless crime bosses, hapless males whose lives are turned upside down because of their ceaseless longing for a woman, and even courageous men on the right side of the law.
The private and public lives of more than ninety actors who starred in the films noirs of the 1940s and 1950s are presented here. Some of the actors, such as Humphrey Bogart, Kirk Douglas, Burt Lancaster, Edward G. Robinson, Robert Mitchum, Raymond Burr, Fred MacMurray, Jack Palance and Mickey Rooney, enjoyed great renown, while others, like Gene Lockhart, Moroni Olsen and Harold Vermilyea, were less familiar, particularly to modern audiences. An appendix focuses on the actors who were least known but frequently seen in minor roles.

Karen Burroughs Hannsberry is also the author of Femme Noir: Bad Girls of Film (1998) and editor of the bimonthly film noir newsletter The Dark Pages. She lives in Chicago.

“Hannsberry is truly a superb writer…this book is tops…good solid research, great photos…fascinating”—Classic Images; “enjoyable…will be welcomed by the film fan as well as the researcher…recommended”—Booklist; “welcome…fills a gap…engaging and meaty discussions of the actors guarantees this work a wide audience…recommended. Public and academic libraries. All levels”—Choice; “highly recommended”—ARBA; “references…are of particular value”—Communication Booknotes Quarterly; “depth of research is impressive…highly engaging”—SPERDVAC Radiogram; “one of the top film books of the year…one of the best books on the subject of Film Noir”—The Blackboard. 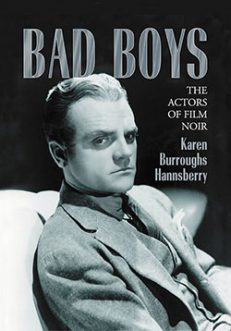