It’s often said that catcher is the most important, most demanding defensive position in baseball. This view explains why so many light-hitting catchers have enjoyed long—and by all accounts successful—major league careers. Yet arguments over the all-time greats invariably privilege offensive standouts, and even among these players batting statistics are more likely than fielding numbers to affect ranking. So what, historically, have been the expectations for major league catchers, and who stands as the greatest in a more balanced view of offensive and defensive contributions?
In Part I of this book, the history of catching and catchers is discussed in detail, with attention to the most celebrated players of each era. In Part II, the author employs sabermetric formulas to rank the 50 greatest catchers since 1920, when changes to the rules, the parks, and the ball dramatically changed the way baseball was played. Also included is a chapter on catchers of the 19th century, deadball era, and Negro Leagues, whose career statistics are either incomplete, inaccurate, or produced under markedly different playing conditions and rules.

William F. McNeil is a longtime baseball historian and the author of numerous books on the game. A member of the Society for American Baseball Research (SABR), he is the recipient of five Robert Peterson awards for increasing the public’s awareness of the Negro Leagues. He lives in Pittsfield, Massachusetts.

Part I. Meet the Candidates

Appendix 6: Ratings with Other Offense to Defense Ratios      243 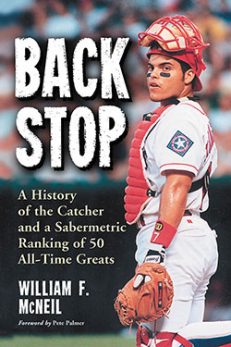