Back from the Dead

Remakes of the Romero Zombie Films as Markers of Their Times

Since 1968, the name of motion picture director George Romero has been synonymous with the living dead. His landmark film Night of the Living Dead formed the paradigm of modern zombie cinema; often cited as a metaphor for America during the Vietnam War and the Civil Rights movement, the film used the tenets of the drive-in horror movie genre to engage the sociophobics of late–1960s culture. Subsequently Romero has created five more zombie films, and other directors, including Tom Savini and Zack Snyder, have remade Romero’s movies. This survey of those remakes examines ways in which the sociocultural contexts of different time periods are reflected by changes to the narrative (and the zombies) of Romero’s original versions.

Kevin J. Wetmore, Jr., is a professional actor and director whose previous books have covered topics ranging from Star Wars to Renaissance faires. He is a professor and chair of the theater department at Loyola Marymount University in Los Angeles, California.

INTERLUDE: LIVING DEAD, LIVE!
Night of the Living Dead on Stage and in Other Media      103

“analyzes the zombie films of George Romero and their remakes by other directors in order to see how the shifting ecology of the undead over time resonates with the audience’s fear of war, terrorism, social malaise, and spiritual apocalypse…Wetmore’s close reading of these films weds the passion of a fanboy with the objectivity of an academic and results in a dissection that is both insightful and entertaining.”—C&RL News; “intelligently written, thoroughly researched and immediately engaging…will interest and enthrall anyone from the casual observer to the hardcore zombie enthusiast”—Scarlet; “an engaged account”—Journal of the Fantastic in the Arts. 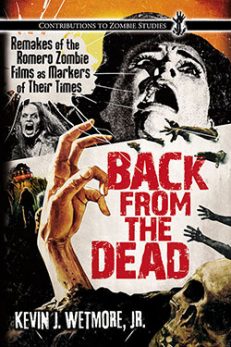