During World War II, aviation was among the largest industrial branches of the Third Reich. About 40 percent of total German war production, and two million people, were involved in the manufacture of aircraft and air force equipment. Based on German records, Allied intelligence reports, and eyewitness accounts, this study explores the military, political, scientific and social aspects of Germany’s wartime aviation industry: production, research and development, Allied attacks, foreign workers and slave labor, and daily life and working conditions in the factories. Testimony from Holocaust survivors who worked in the factories provides a compelling new perspective on the history of the Third Reich.

Daniel Uziel has worked at the Yad Vashem Holocaust Memorial and for the Israeli Air Force and the German Foreign Office. He spent a year as a research fellow with the U.S. National Air and Space Museum and has written a book on propaganda and the Wehrmacht and several articles on World War II aviation history, the Germany army and the Holocaust.

“Uziel, has meticulously researched the rise of German Air Force aircraft production from its creation in 1935 to it final days in April 1945”—Military Review. 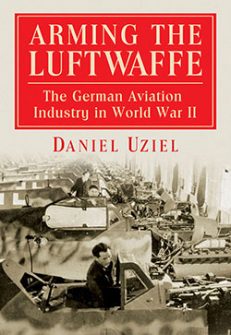 You're viewing: Arming the Luftwaffe $45.00
Add to cart