Bursting onto the scene as a 20-year-old rookie, Arky Vaughan quickly established himself as the next great Pittsburgh Pirates shortstop. In 1935 his .385 batting average eclipsed even that of the immortal Honus Wagner, who was a steadying influence for Vaughan during his 10 seasons with the Pirates. Vaughan never hit under .300 with Pittsburgh and his versatility later made him an asset to the Brooklyn Dodgers. One of the quietest men in baseball, the nine-time All-Star eschewed the limelight but received plenty of attention for his on-field performance, for his one-man mutiny against Brooklyn manager Leo Durocher, and for walking away from the game to take care of his family and his beloved ranch during World War II. Drawing on dozens of articles, personal writings, recorded interviews and his daughter’s unpublished biography, this book covers the life and career of an often overlooked Hall of Famer who died in a tragic boating accident at age 40.

Frank Garland, a native of Pittsburgh, worked for more than 25 years as a reporter at several northern California newspapers and is now a journalism communications program director at Gannon University in Erie, Pennsylvania. 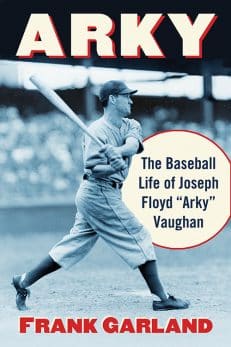