The Life and Theories of G.S. Isserson

The Red Army’s leading operational theorist in the 1930s, Georgii Samoilovich Isserson was the mastermind behind the “deep operation”—the cornerstone of Soviet offensive operations in World War II. Drawing from an in-depth analysis of Isserson’s numerous published and unpublished works, his arrest file in the former KGB archives, and interviews with his family, this book provides the first full-length biography of the man. The bulk of the narrative deals with the flowering of his intellectual talents from 1929 through 1941. Additional chapters deal with Isserson’s arrest and his remaining 35 years, 14 of which were spent in labor camps and internal exile.

Richard W. Harrison lives in Boiling Springs, Pennsylvania. A former investigator with the Department of Defense’s POW/MIA office in Moscow and an independent researcher, Harrison has also taught Russian history and military history at the college and university level. 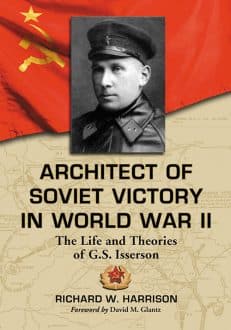 You're viewing: Architect of Soviet Victory in World War II $49.95
Add to cart