This is the first book to comprehensively examine the multitude of non-Archie teen humor comic books, including girls and boys such as Patsy Walker, Hedy Wolfe, Buzz Baxter and Wendy Parker from Marvel; Judy Foster, Buzzy, Binky and Scribbly from DC; Candy from Quality Comics; and Hap Hazard from Ace Comics. It covers, often for the first time, the history of the characters, who drew them, why (or why not) they succeeded as rivals for the Archie Series, highlights of both unusual and typical stories and much more. The author provides major plotlines and a history of the development of each series. Much has been written about the Archie characters, but until now very little has been told about most of their many comic book competitors.

Michelle Nolan has been a newspaper and magazine feature writer for more than 50 years. She received an Inkpot Award for her work as a comics and pop cultural historian and entrepreneur. She has written more than 12,000 published articles in newspapers and magazines along with contributions to dozens of books. She lives in Bellingham, Washington.

Preface 1
Introduction: The Rivals of Riverdale 3

“A comprehensive overview of less-known American teen humor comic books from the mid-20th century….Plots of individual comics are summarized at length, and exhaustive bibliographical information is provided. Less attention, however, is given to the writers, artists, and/or readership of teen humor comics….The prose is clear, well written and free of jargon, and extensive illustrations are included. Most useful to specialists interested in US comics and popular and visual culture….recommended”—Choice 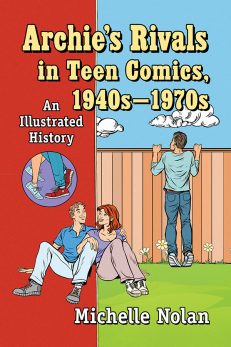